Work > Proposal for a Memorial to Partition 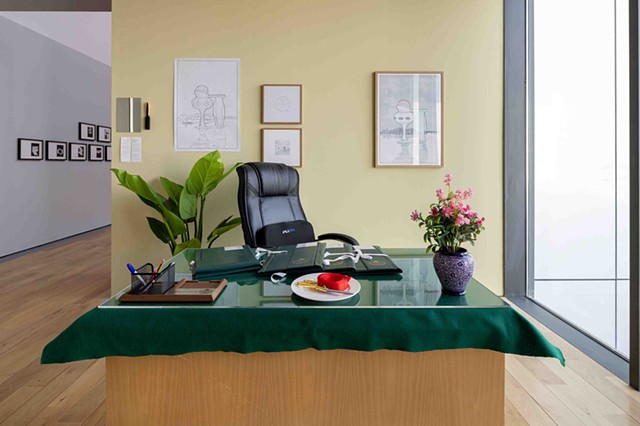 The Pak Khawateen Painting Club proposes a museum on Partition that never takes off. Complexities arising as a result of Partition are often whitewashed and represent a blind spot in history, with the generation who experienced the enormity of the event slowly dying away. Like many government schemes that commence with good intentions and are often sugar-coated with populist beliefs and panegyric praise, the Partition Museum is fated to be lost in the annals of history when it becomes imbricated with the bureaucracy and paper pushing that often characterises the officialdom of many post-colonial nations. Corruption, embezzlement and frustrating delays often result in projects being shelved. The production, circulation and accumulation of paper containing requests, permissions, sarkari jargon and remonstrations embody the kafkaesque routes these paper trails take on as they flit from department to department.

In this satirical re-enactment of pompous governmental rituality we mimic the protocols, official language and tropes of the “sarkar”/establishment. The Pak Khawateen Painting Club become mediators between the governmentality of the State and its coded language as their Project becomes entangled in meaningless, winding chains of correspondence. In this narrative, banal correspondence becomes entangled with ideology, culture, agendas and political point scoring; the white elephant ultimately prevails.

Bio: Pak Khawateen Painting Club (translated from the Urdu as Good Pakistani Women’s Painting Club) was formed by invitation to create a new commission at the Lahore Biennale 02 (2020). Its core concerns revolve around water bodies, hydro architecture, municipal, bureaucratic, and ecological conflicts. The Painting Club investigates powerful mega structures that result in the displacement of indigenous populations, ecological imbalance and environmental devastation. The unequal division of resources and the inundation of histories, hydrological engineering finds an unexpected foe in its (not so) “Pak” provocateurs (more simply, members): Saulat Ajmal, Amna Hashmi, Saba Khan, and Zohreen Murtaza. The artist collective was founded in 2019 in Lahore, where some of the members live and work.